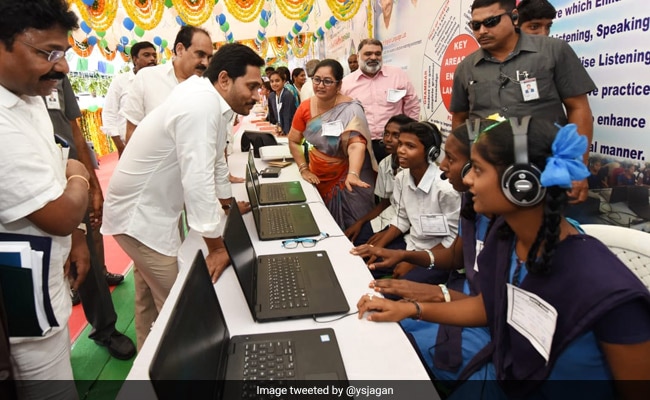 The Chief Minister said that his YSRCP-led state government will overcome all the challenges and clear every hurdle as the goal to meet the requirement of what the fast-changing technology in the world expects from youth, ten years from now.

Addressing the gathering at a school here on Thursday, he said, “Despite the criticism from detractors, we will go with English medium schools as we have to prepare the students to boldly face and meet up the requirements of the technology-driven world. We should not feel guilty. It will be done so that the future generation can be prepared to face the highly dynamic and technology-driven world.”

“Change will come only if the right decision is taken at the right time as we are competing with a job market that would be there five, ten or fifteen years from now,” he added.

The Andhra Chief Minister also targeted the opposition for targeting him over the launch of the campaign and said, “There has been criticism and detractors have been running a campaign targeting me, but we will carry our mission and the future of the next generation is our top priority. We will transform all government schools with the required infrastructure and up-gradation of skills besides setting up of English labs in addition to providing basic amenities like clean environs, furniture, toilets, running water, compound wall, blackboard, renovation and involve parent committee.”

The scheme will be implemented in 15, 715 schools in the first phase and will cover all schools in three years’ time with a budget of Rs. 12,000 crores. For the first year, Rs. 3,500 crores will be spent for the development of the infrastructure.

“With the introduction of English medium from Classes 1 to 6, there are many detractors and those in high positions have been criticising it. They should realise that there is no place for hypocrisy in democracy. They have to introspect before sending their children and grandchildren to government schools or to English Medium schools,” he added.